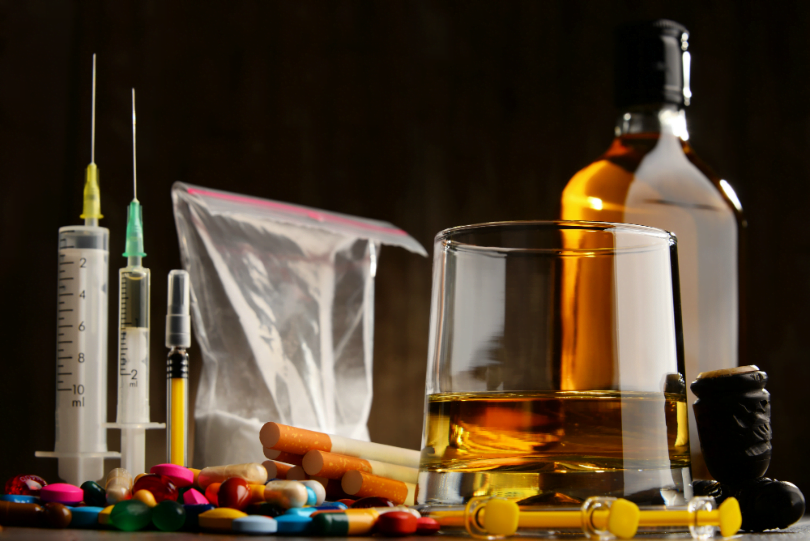 Almost 5.5 percent of the world’s population used illegal substances in 2015. The Center for Disease Control indicates that in the same year just over 10 percent of Americans over the age of 12 had used illicit substances within the previous month. 2.4 percent of this age group had used psychotherapeutic drugs, such as Xanax and Zoloft, recreationally within the previous month. Both illicit and prescription drug abuse have caused significant concerns for health and safety in our society. Here are more examples of common drugs abused.

Alcoholic beverages such as Beer, Wine, Vodka, and Rum can bring about sensations of relaxation, euphoria, and increased self-confidence when the blood alcohol level is kept below 0.12%.

Drug Statistics: 15.1 million adults were addicted to alcohol in 2015, with only 6.7 percent receiving treatment to recover from alcohol addiction.

Coke, Blow, and Nose Candy are all names for Cocaine. Many people expect cocaine to help them feel euphoric, give them increased energy, and increased stamina. While these short-lived effects do make an appearance, they often come with feelings of anxiety, impatience, restlessness and paranoia. Long-term cocaine abuse can cause psychosis, heart attack, strokes, and seizures.

Drug Statistics: In 2016, 14.4 percent of individuals aged 12 years and older have used cocaine at least once over the course of their lifetimes. 7 percent of those had used it within the previous month.

There are several types of hallucinogens: LSD—also known as Acid, Microdots, and Blotter—can create hallucinations, sporadic changes in emotion, and the feeling of two sensations simultaneously, such as tasting colors or smelling sounds.

Psilocybin, which is also known as Magic Mushrooms and Shrooms causes a change in time and space perception, hallucinations, and spiritual experiences. Peyote, or Cactus seemingly puts a visual texture on real objects and is dissociative.

DMT, sometimes known as Dimitri can cause euphoria, dissociation, and significant spiritual hallucinations. The final example of hallucinogens is used to induce hallucinations in spiritual ceremonies and is called Ayahuasca or Hoasca.

Hallucinogens come with the same negative side effects, which include nausea, dry mouth, insomnia, substantial sweating, and feelings of panic and paranoia. Prolonged use of hallucinogens can cause memory loss, weight loss, persistent anxiety, psychosis, flashbacks, and suicidal thoughts.

Drug Statistics: People between the ages of 18 and 25 are most likely to abuse hallucinogenic drugs. 17.20 percent of individuals in this age group have used one at least once in their lifetimes and 1.9 percent of those have used it as recently as within the previous 30 days.

Sometimes called Weed, Pot, Reefer, Grass, Dope, Ganja, Mary Jane, or Hash, Marijuana induces a feeling of substantial relaxation and mild euphoria. In many, it is also the cause of a temporary reduction of memory and coordination, mood swings, lethargy, lack of motivation and increased appetite.

Persistent use can cause serious side effects such as paranoia, respiratory issues, decreased IQ and in young adults under the age of 25, Marijuana could disrupt proper development of the brain.

Drug Statistics: According to the 2015 National Survey on Drug Use and Health Marijuana was the most commonly used illicit drug—22.2 million people had used it in the previous month. In 2017, it was reported that 78 million Americans had tried marijuana at least once in their lifetime and 55 million users identified as regular users.

MDMA is widely known as a club drug and is often referred to as Ecstasy, Molly, E, and XTC.

MDMA is usually used for its short-term effects, which include increased empathy, an exaggerated sense of personal well-being, heightened tactile sensations, and an increased affinity for other people.

These usually appear with other side effects such as raised body temperature, teeth clenching, chills and nausea. Consistent use of the drug often creates complications with mood, sleep patterns, and persistent anxiety.

Drug Statistics: 4 percent of individuals aged 18–25 years old used MDMA in the past year. 0.9 percent had used it within the previous month.

Methamphetamine is usually known as Meth, Crystal, Crank, and Speed. It’s used for its initial rush of euphoria but comes with side effects such as nausea, panic, hallucinations, erratic and often violent behavior, hyperthermia, and increased heart rate.

Adverse long-term effects create a higher risk for Alzheimer’s or a similar disease along with psychosis, depression, breathing difficulties, malnutrition, and permanent damage to blood vessels.

Drug Statistics: About 5.4 percent of Americans aged 12 years and older used meth at least once in the course of their lifetime. 0.2 percent of people in the same age bracket admitted to using it within the previous month.

Opioids, prescribed by doctors, are in a number of medications largely used to treat pain. Generic names of these Opioids are Oxycodone, Hydrocodone, Morphine, Codeine, and Methadone. Brand name Opioids are OxyContin, Percocet, Vicodin, and Lortab.

They all have similar effects including pain relief, feelings of euphoria and relaxation, fatigue and mild sedation. In addition, many people experience side effects of nausea, vomiting, slowed breathing, paranoia, and lethargy.

In the long-term, consistent abusers of these medications commonly experience bloating and constipation, while other concerns can lead to brain damage. It’s also important to note that many of these prescription medications include a significant amount of acetaminophen, which puts the user at a higher risk for liver damage.

This list is a sampling of the most commonly abused substances in the United States. If you or someone you know is struggling with the abuse of any substance, contact us today. We are here to help.