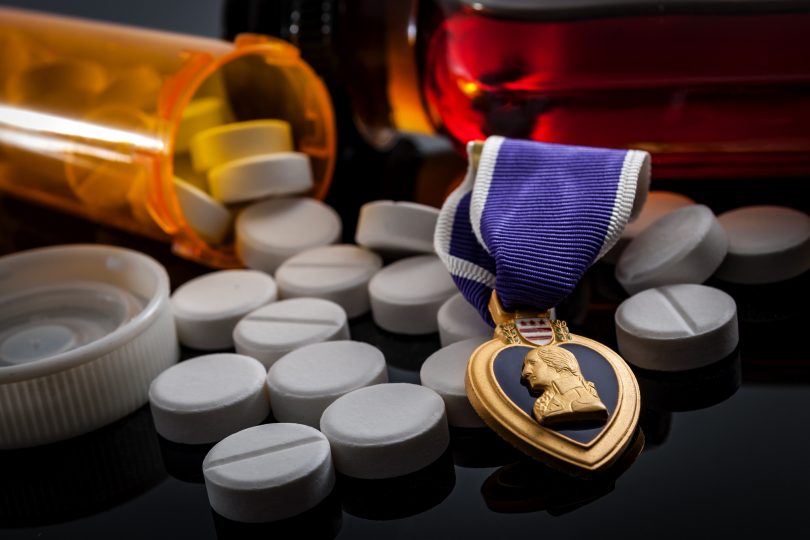 With nearly 2 million active duty members serving in the armed forces at any given point, just about everyone knows someone who has served. We don’t often take drug use in the military seriously. This is despite the great pride and support we give with our words and ribbons. Drugs and alcohol problems can plague the life of veterans long after they’ve served and been discharged.

Here are a few statistics that you need to know to understand veterans and drug addiction in America.

While most every veteran who gets deployed to a war zone will return home with memories that can be difficult. Statistics show that one in five veterans has been permanently impacted by PTSD. Post-traumatic Stress Disorder is a broadly applied term but it can apply to anyone who can’t function comfortably following trauma. Only people who have been deployed to an active war zone know what it’s like and all would attest to the impact it leaves on your psyche.

With PTSD, veterans need therapy, medication, or even rehabilitation to move on from the memories that haunt them. People suffering from this disorder face triggers at any time. No amount of therapy can help someone avoid the experience of hearing a motorcycle backfire that transports them right back to that original traumatic experience.

Out of that 20% of veterans who have PTSD, one in five of them also deal with Substance Use Disorder. In an effort to escape the thoughts and feelings associated with trauma, many people seek respite with drugs and alcohol. Veterans are no different.

The trauma that these veterans experience isn’t written on their body. Due to this many people fail to realize how PTSD impacts every part of life. A few drinks help put the mind at ease and make sleep come easier. However, this can turn into an addiction quickly.

When veterans have PTSD and alcohol problems combined, they have a higher tendency to become binge drinkers. Binge drinking has been linked to permanent issues like cirrhosis or cancer and even death from alcohol poisoning.

People who report a high degree of stress in their life often seek out smoking cigarettes and using nicotine products to help deal. This relationship persists among veterans. Even without a PTSD diagnosis, about 3 in 10 veterans smoke cigarettes or use nicotine in some way.

That number doubles when you take into account those who’ve been diagnosed with PTSD. While it can be challenging to find respite when you’re struggling with trauma, the quick release of nicotine can provide some relief when you need it. When you’re suffering trauma, it’s hard to overcome an addiction, especially one that’s as powerful as nicotine.

If you or someone you know has been exposed to combat, they are going to be more likely to smoke. Make efforts to help them get over their addiction or if you’re one of these vets seek out help from an anti-smoking group to break the addiction. There are too many negative health consequences of being a smoker to risk the lung, heart, or other diseases you could get from years of smoking.

3. Alcoholism in Nearly Half the Military

Alcohol falls into the category of substances that are often found among veterans with SUD or AUD.  This permeates every level of the military from active duty to veteran personnel.

Beyond just the occasional holiday drinking bout that gets out of control, one in five active service members report binge drinking once a week. With people seeing exposure to combat on a regular basis, that number goes up to almost 30%.

If you’re an active service member, you have a standard of behavior to uphold. Being seen drunk in public could get you in trouble.

However, those standards drop off following discharge. When service members get the release from active duty, there’s no superior officer to look over them or hold them accountable for their behavior. With scant services from the VA hospitals and clinics throughout the nation, people can go without the help they need for years.

If you know a veteran dealing with drinking issues, contact help today.

4. Substance Abuse Linked To Many Suicides

For years, we’ve been talking about the problem of veteran suicide as a national crisis. Until we take into account the linkage between substance abuse and suicide, we won’t be able to make the changes that we need to for our veterans.

Suicide rates began to climb in the last few years and have now outstripped the rate for civilians. Now one in three veteran suicides have a link to drugs and alcohol. We need to take these numbers seriously. Out of all of the suicides in relation to drugs and alcohol, prescription drugs are also in connection to another third of them.

By neglecting the mental health and comfort of our veterans, we do them a disservice as a thank you for their service. We need to keep the lines of communication open for them to talk about their trauma and addictions. We also need to have more staff and money dedicated to helping them to overcome struggles.

Drug Use In The Military is a Serious Issue

Of all of the issues that veterans face when they return home, drug and alcohol issues have to be one of the most prominent problems facing them. Without adequate help, drug use in the military will follow veterans for years after their service has ended.

If you or someone you know has reached the level of a functioning addict, here are a few signs to know if you should intervene. For more assistance and resources contact us at (877) 322-2450.