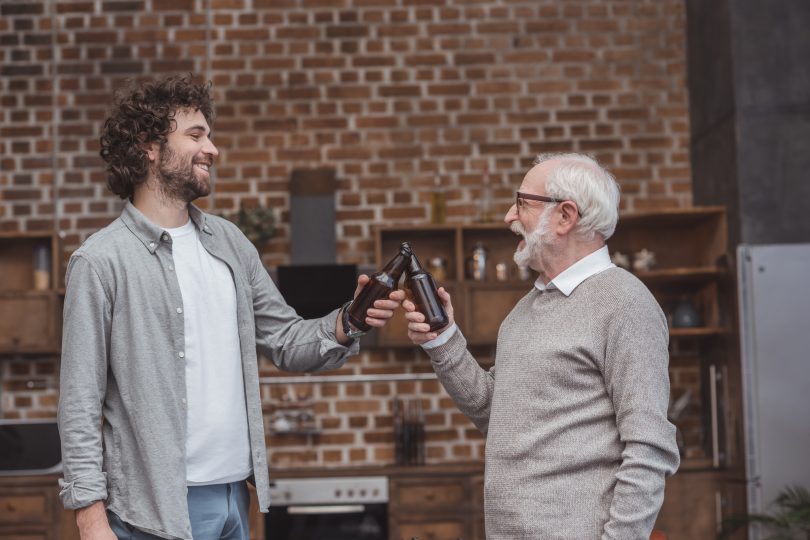 As about 1 in 7 Americans will deal with some kind of substance addiction in their life, our best tool is to inform and help people to avoid the common pitfalls.

One of the things we can’t prevent however is the genetics of alcoholism. While many people come to alcoholism from external factors that have to do with abuse, the economy, or psychology, genetics still play a role.

Here is what you need to know about the connection of genetics to alcoholism.

Over the years, researchers have found strong evidence that alcoholism has a component that’s linked to our genes. While it’s not entirely clear which gene is responsible for alcoholism, the evidence is mounting. In studies done on laboratory animals, certain traits and hereditary connection of alcoholism.

Human test subjects have allows shown that genetic factors may play a huge role in the development of alcoholism as well. However, it’s still unclear how big of factor genetics have when it comes to either developing alcoholism or passing it on to your children.

There have even been studies that have tracked the relationship that children and adolescents have with alcoholic parents. Research has linked the instances of alcoholism to having parents that were alcoholic. Alcoholic parents correlated with a figure showing that children were then four times more likely to become alcoholics.

While environmental factors could have a part to play in all of this, there’s strong evidence of a hereditary relationship.

Studies looking at families, twins, and even accounting for adopted children have shown the genetic components to alcoholism and its potential. One specific gene, the A1 allele of the DRD2 gene, has been associated in the past with instances of alcoholism. This gene was the first potential link in the relationships between alcoholism and genetic factors.

Specific studies even look at twins who have separate parents by adoption and raised in completely different situations. They found that while alcoholism was slightly higher in cases where one of the adopted parents was an alcoholic.

However, these tests of twins showed a high instance of alcoholism for twins who had a genetic link to alcoholics. When the biological father of twins was an alcoholic, regardless of alcoholism in their adopted families, children were shown to have a much higher risk of it.

While it could take years to pinpoint the exact genes that are associated with alcoholism, these results suggest some interesting correlations. There aren’t finalized and conclusive results yet, but several genes have been found the play a role in showing that people could be more prone to risk. One of the risky behaviors that researchers would name in this case would be to be prone to drinking to excess.

These behaviors can result in dependence, with the potential for genetics to weigh in. While some genes have a direct impact on alcoholism, others are looser.

Researches at the University of California tracked the genetic disposition of fruit flies to find the cause of alcoholism once and for all. Drunken fruit flies apparently exhibit similar behavior to human beings when they drink. While they might not participate in some of the same complex thinking, they surely make many of the same strange decisions.

While you might think you have little in common with a fruit fly, their resistance to alcohol seems to have similarities to ours. The same kind of molecular mechanism that resists alcohol appears in both types of organism in the same way.

There are several more years of work to be done on this but it appears that there is some genetic argument to be made for dissecting alcoholism. The chronic effects of alcohol in humans can be understood in very similar ways to how it arises in fruit flies.

It’s overwhelming to think that genetic dispositions to alcoholism are akin to a permanent diagnosis. But, they’re not writing in stone. A genetic predisposition to alcohol means that the individual must take care when dealing with alcohol. They’re more likely to deal with a chronic issue that the average person, even if their addiction isn’t as severe.

There are a wide variety of environmental and genetic factors that contribute to the risk of alcoholism. Alcohol consumption won’t necessarily be the cause of alcohol dependence unless the right cocktail of genetic and environmental factors are present. These studies show that some genetic factors play a major role, while others don’t.

It will take several more years before we fully understand just how powerful these individual genetic factors are. Information is available to give us the tools to plan for the future and to make life easier for everyone.

Genes show you the risk factors but don’t determine the destiny of anyone’s life. If anything, they’re meant to be a warning sign. Letting an adolescent know now that they have a high risk for alcoholism can help. It’s important for the young to think twice before they start drinking with friends at parties.

Early prevention efforts should be our goal more than anything else. We can’t completely erase the potential of alcoholism affecting anyone. However, can do everything in our power to mitigate the effects. Prevention is the best way to keep people safe and healthy, no matter their genes.

We’re still doing all kinds of genetic research to understand how our bodies and minds work. Meanwhile, we’re learning that alcoholism isn’t always within our control. It’s just like the way we can’t stop ourselves from dealing with an allergy or a heart condition. The genetics of alcoholism keep us from escaping it entirely.

If you want to know what a successful road to recovery looks like, check out this video for inspiration. To learn more about the risks of alcoholism or how to find recovery, reach out to us at (877) 322-2450.