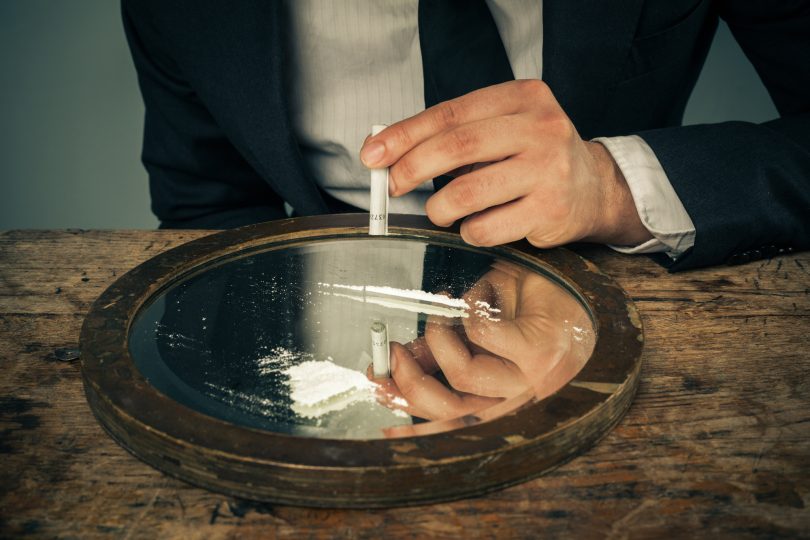 Cocaine is the second most popular illicit recreational drug in the country, right behind cannabis. The United States is the world’s leading consumer of cocaine, and addiction to the drug is a growing nationwide issue.

Signs of cocaine addiction may be difficult to identify, especially in the early stages of addiction.

Cocaine is a drug that causes the brain to release the neurotransmitter dopamine, causing a feeling of euphoria. The drug was first invented for medical use as an anesthetic. The high that cocaine creates is so addictive that an individual can get hooked on the drug only after using it a handful of times.

There are two main forms of cocaine: a powder that can be injected, snorted, rubbed into the gums, swallowed, or smoked, and a rock form called crack cocaine that is generally smoked. Crack cocaine is a by-product when making pure cocaine, and is the cheaper and dirtier form of the drug.

Cocaine affects the mind and is a rapidly-acting drug that causes distinguishable changes in behavior. When someone uses cocaine, it takes effect rapidly, and the effects begin to wear off between 5 and 30 minutes. At parties, in particular, addicted individuals may need to disappear for minutes at a time to use the drug again. When coming down from the high, there is a crash where users will tend to eat or sleep more than usual. Because the drug acts and disappears so rapidly, users tend to binge on the drug.

Those who inject cocaine will have visible track marks or needle marks that cause bruising and sores, on their body. They may also have a white powder/residue on their nose or mouth, and may regularly suffer from a bloody nose due to snorting the drug.

Finding drug paraphernalia is a common way for loved ones to detect that an individual is suffering from drug addiction.

Heavy cocaine use is linked to rapid weight loss, both due to users sometimes skipping meals and an overall drug-induced change in metabolism. By interfering with metabolic processes, cocaine reduces body fat and can cause weight loss in addicted individuals. Because of rapid weight loss, these individuals may have an increase in their appetite yet be unable to put weight on.

Those struggling with a cocaine addiction may display volatile mood swings due to the effects of the drug. They may become more irritable, defensive, and even reclusive. Because of the euphoria that cocaine generates, those addicted to the drug may begin to display more risky behavior, such as dangerous stunts or life decisions, or promiscuous sexual encounters.

Cocaine is an expensive drug, and not a habit easily funded. Those who are addicted to the drug may soon face financial problems due to their dependency on the expensive, pure substance. Cocaine users may transition to the dirtier, cheaper form of the drug called crack cocaine to be able to afford their habit. If someone begins to suffer financially, they may also turn to stealing from friends or family. If cash, jewelry, or other goods seem to be disappearing, this is a definite need for concern.

Coming down from the high of cocaine, users will feel tired and display reduced activity levels. This may lead to excessive sleeping, causing an individual to miss social or family events, work, or school.

Those who regularly use cocaine may reach a time when they are unable to afford the drug or realize their addiction is consuming their life. These individuals will try to fight the addiction and may display cocaine withdrawal symptoms during this time.

Cravings for the drugs generally outlast the physical symptoms of withdrawal, which can include bingeing on foods, disruption in sleep patterns, depression, tremors and muscle aches, restlessness, and even vivid dreams.

Unfortunately, between 50% to 90% of addicts who choose to detox outside of treatment centers will relapse into their addiction.

Inpatient treatment is a common way to seek help for an addiction, providing an individual a peaceful environment where they can heal. Outpatient care can also be successful, but stressful workplace or familial variables may cause a loved one to relapse.

In the United States, cocaine is listed as a Schedule II drug due to its high potential for addiction. The drug releases dopamine, and withdrawal begins just 90 minutes after using it. This quick-acting drug forces users to regularly use it to continuously feel the euphoria it produces.

Facing addiction or seeing a loved one succumb to it is heartbreaking. Whether you or your loved one are suffering from an addiction, it’s important to find a rehab program to help begin the healing process.

For additional resources on addiction and ways to seek help, visit our blog today or contact us at (877) 322-2450.