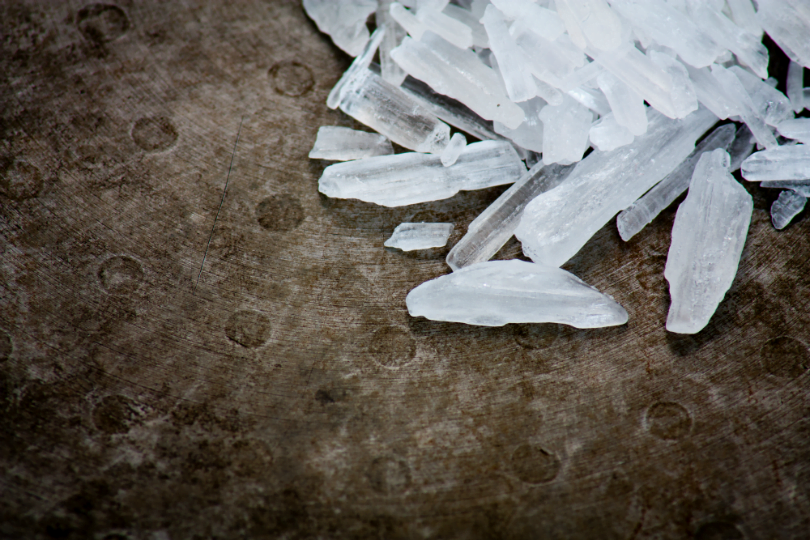 Crystal Methamphetamine is a powerful stimulant that’s readily available and fairly inexpensive to make. Because of this, we’ve experienced a huge uptick in Crystal Meth drug addiction in the US.

This is an extremely dangerous drug that creates a powerful euphoria unlike anything associated with other Amphetamines. It’s because of the unpredictable nature of Crystal Meth that it’s become such a danger to people from almost every socioeconomic class.

The National Institute on Drug Abuse describes Crystal Meth as a type of Amphetamine that looks like shiny clear crystals, glass, or even bluish white rocks. There are any number of different ways that this drug is made, and all of them equally dangerous.

Crystal Meth is made from a combination of household chemicals combined with strictly controlled substances that are difficult for the makers to find. This can include ingredients of things like cough syrup or farm chemicals.

Because of this, many people will steal these items from grocery stores and from rural areas to have enough to supply their meth labs. If one thing goes wrong the entire place can explode, resulting in serious contamination and death.

What is Crystal Meth?

Amphetamines are a class of drugs referred to as stimulants. There are some legitimate medications that use these drugs for those who suffer from ADHD or narcolepsy. Crystal Meth takes the concept of Amphetamines to the next level and purifies the stimulant activity. This strengthens the effects and creates an unpredictable and addictive combination.

When someone is prescribed these types of medications, they are carefully monitored and controlled by a licensed physician. For someone who makes and uses crystal meth, they’re risking their lives every time they use the drug. They have no way of knowing the level of chemicals that are included in the mixture, and this can lead to things like stroke, severe psychosis, and even death.

Crystal meth made its debut in the late 19th century and was later developed for use in World War I. Several countries thought that it made their soldiers braver and easier to manipulate. It didn’t go into mass production and gain popularity until the 1950s.

It was used medically to fight depression, aid in weight loss, and help fight fatigue. By 1970, the US had made the use of Crystal Meth illegal due to its volatile nature. It was then the people learned how to illegally manufacture it, and the drug became even more dangerous.

Over the next 30 years, Crystal Meth gained traction among people living in rural areas where it was easier to manufacture. From here it was shipped throughout the country, becoming a cheap alternative for Cocaine. Huge labs were set up in areas of California, Mexico, and other international locations. This made its production a global crisis.

The effects of Crystal Meth last anywhere from 8 to 12 hours, and the drug itself is fairly cheap to purchase on the streets. Tolerance is developed quickly, and the habit-forming nature of the drug has made it a huge seller throughout the country.

Next to Heroin and other opioids, Crystal Meth addiction has been one of the largest drug epidemics we’ve ever faced. It’s important to understand how Crystal Meth destroys the body.

Why Do People Become Addicted to Crystal Meth?

Crystal Meth creates a highly euphoric state combined with elevated levels of energy and false confidence. It induces something that’s akin to mania and can deprive people of sleep for days at a time.

Once someone starts using Crystal Meth, there’s a good chance that they’ll need to continue using it to offset their lack of sleep. It’s very easy to become physically and psychologically addicted to this drug.

Many people who suffer from anxiety or any type of fatigue syndrome will utilize Crystal Meth to combat the symptoms. It may make them feel more outgoing or make them believe that they have more energy than they do. This can also result in physical strain that causes long-term injuries.

When someone is high on Crystal Meth there’s a good chance they aren’t going to notice some of the things that are happening with their bodies. They may be sick or dealing with a number of different physical symptoms that they use the drug to ignore. This can lead to extremely dangerous situations.

Over the last few decades, the use of Crystal Meth is skyrocketed in colleges and other learning institutions. Students feel pressured to stay up all night studying and may turn to Amphetamines to allow them to do this.

When someone attempts to stop using Crystal Meth, they can experience extreme depression, fatigue, mood swings, psychosis, and even physical aches and pains. One of the most notable signs of withdrawal from stimulants is extreme fatigue that can last up to a week. Someone may only stay awake for a few hours a day.

This is because of the way that their bodies have become accustomed to the crystal meth and started to use it to regulate their energy levels.

A long-time user of crystal meth will exhibit several physical symptoms. Most notably are those of extreme weight loss, facial sores, rotten teeth, and thinning hair. Their behavior may become increasingly erratic, and they will enter phases of psychosis induced by lack of sleep and the impact of the stimulants on the brain.

Choosing to seek help for this addiction is imperative. It will eventually result in death if the person can continue using crystal meth unchecked. The first step to any rehab process is detox.

Most people who use crystal meth will require an inpatient rehab facility and will need to be medically supervised as the drug leaves their system. They may need to go on antidepressants or other antipsychotic medications to help regulate their brain chemistry as the Crystal Meth completely leaves their body.

After this, it’s important that they seek out long-term behavioral and cognitive therapy. The time spent using Crystal Meth can result in severe depression and an inability to cope with traumatic events. Exercise and psychotherapy can also have a huge impact on one’s ability to stay sober. To find resources on the best treatment for meth addiction contact us at (877) 322-2450.

Addiction is a chronic disease and requires lifelong treatment. Crystal Meth can also company other risky behaviors that can have long-term legal and ethical consequences. Any and all impacts from this addiction will need to be identified and dealt with in order for the addicted person to cope with a sober life.